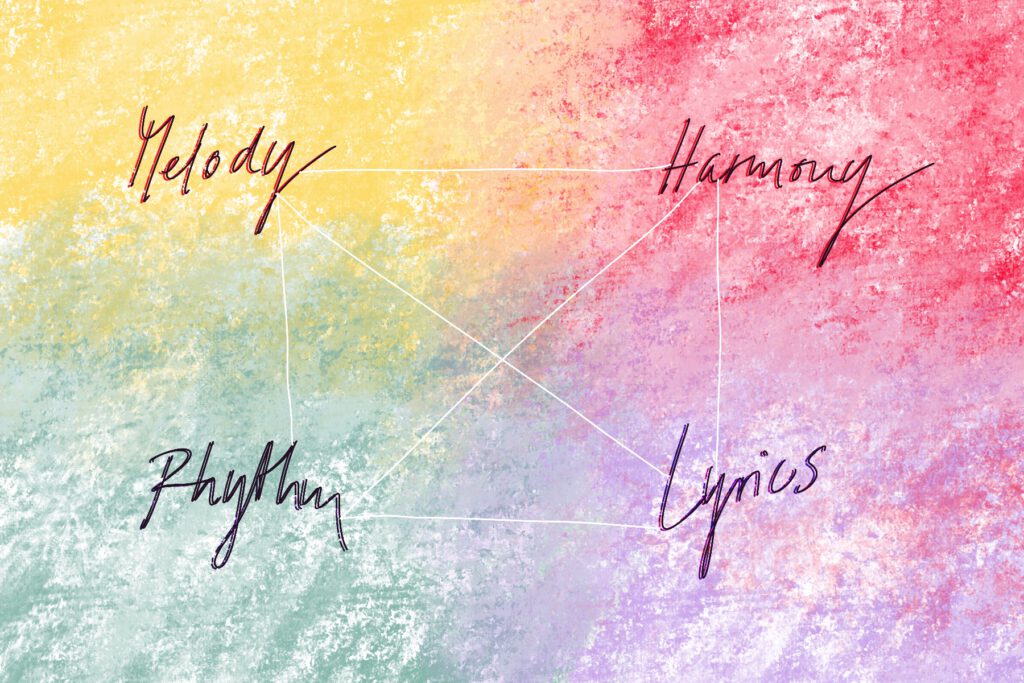 Ok. Animating is out. As well as my first approach to apply my method of transforming to different visualizations.

The process of visualizing existing music and use its outcome as a base for the creation of new music, still maintains to be the core of my work. While my previous attempt has been a rather intuitive and schematic approach, my very current thoughts deal with the question of repeatability within the first of the creative steps. The relation between the original song, the visualization and my composition must become visible and comprehensible. There must be at least a rudimentary relationship here.

Due to time constraints and the time consuming implementation, I decided to limit my analysis of selected songs to „paintings“. As before, I will work digitally with the Apple iPad including Apple pencil with the software Procreate.

I intend to establish a fixed visual scheme or pattern for the 4 basic elements of harmony, melody, rhythm and lyrics. The harmonies are represented as colored areas. From a subjective point of view I would assign bright and/or warm colors to the major tonalities, dark and cool colors rather to the minor spectrum. Changes in the color gradient refer to harmonic changes or modulations. The melody is made visible as a white (salient) line that stands out clearly from the color background. The rhythmic element seems to challenge me quite a bit – how do you emphasize movement in a motionless image without a notated language? For now I decide to interpret patterns that arise during the painting process as rhythmic information. The development of the lyrical element is already established by a three-minute „association session“ following the completion of the painting.

Based on my learnings so far, I would reformulate my scientific question as follows:

Composing based on visual arts. How creativity is gained from a process of transformation. (A self-experiment)

An overview of the songs I chose for my experiment until now:

The song I chose for video visualization is:

For song visualization in form of a painting, I chose the following:

2. I heard you singing (Jacob Collier and Becca Stevens) -> completed

3.  Gotta be another way (KNOWER with wdr Big Band)

4.  Sing To the Moon (Laura Mvula with Snarky Puppy)

5.  In my Bones (Jacob Collier (feat. Kimbra + Tank and The Bangas)